The People and Parks Foundation has been the proud recipient of some highly regarded awards and industry recognition in recent years. We are thrilled that our health and wellbeing efforts and initiatives are noted for their social relevance and community connection. 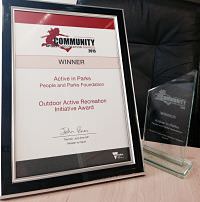 People and Parks Foundation’s Active in Parks program was recognised as part of the Victorian Government’s Community Sport and Recreation Awards 2015 in the Outdoor Active Recreation Initiative category. We were so proud to be among an outstanding group of finalists, including Yachting Victoria for their Discover Sailing Day, and Ian White’s Melbourne Playgrounds.

“People and Parks Foundation is passionate about connecting people to parks and other nature-based settings for health and wellbeing outcomes.” – CEO Rob Anderson

People and Parks Foundation is committed to health and wellbeing for all Australians. Our program Active in Parks addresses the physical, mental and social health concerns affecting communities by encouraging positive, sustainable behavioural change. To ensure lasting change in communities around the adoption of healthy behaviours, Active in Parks recognises that forging connections with healthy natural environments is intrinsically linked to human health. Active in Parks empowers communities to lead and develop their own health strategies around outdoor sports and recreation, and through www.activeinparks.org, connects people to thousands of outdoor activities. 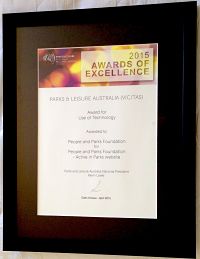 Parks and Leisure Australia (Vic/Tas) Awards of Excellence 2015: Use of Technology Award

People and Parks Foundation’s Active in Parks program has spent the better part of 12 months developing a fantastic new online resource. The website, which promotes outdoor activities and events via #WhatsOnOutdoors, and encourages individuals, community groups and other service providers to register and promote their own activities/events through this same database, has won its first award!

In April 2015, our Active in Parks website won the Parks and Leisure Australia‘s 2015 Award of Excellence: Use of Technology for the Victoria/Tasmania region. This award acknowledges outstanding achievement in the area of technology application.

We’d like to take this opportunity to thank all of our supporters and partners who have helped realise this fantastic project, and contributed to Australia’s first website dedicated to getting active outdoors. In particular, we’d like to thank our sponsor Medibank Community Fund for their incredible support. Thanks also to Symplicit for their work behind the scenes developing the website.

People and Parks Foundation are delighted that ‘Active in Parks’ has been recognised as a winner in the National Preventative Health Awards in the category of Medicare Locals Preventative Health Awards. The inaugural awards encourage leadership in the area of preventive health, and recognises sectors of the Australian community that work to promote health and wellbeing. Active in Parks was recognised at an Awards ceremony in Canberra in July 2013.

This is a very exciting achievement as Active In Parks has now been recognised on a National, State and International level. 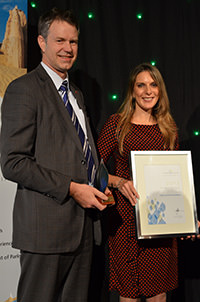 People and Parks Foundation were awarded the Excellence in Parks (Social) Award for the Healthy Parks, Healthy People – Geelong’s Active in Parks Program at the 5th International Parks Management and Leadership Conference ‘Parks Beyond Boundaries’ in Adelaide in 2012.

The award recognises excellence and best practice in operational programs and projects that welcome new visitors or encourage the use of parks by groups that do not usually visit or recreate in them. The awarding organisation, the Parks Forum, is the peak body for park management organisations with members across Australia, New Zealand, Canada, the UK and the US.

The first stage of the pilot program was launched in September 2011, and involves health professionals including doctors, maternal and child health nurses, and youth workers referring their clients and patients to organised activities in parks to improve their health and wellbeing. The People and Parks Foundation and the team in Geelong are thrilled with the recognition and attribute the success of the program to their committed partnerships and all of the wonderful participants in program activities.

Active In Parks achieved peer recognition at the prestigious 2012 Victorian Health Promotion awards. People and Parks Foundation were one of three finalists in the ‘Building Health through Community and Local Government’ category at the official awards ceremony. Held at Victoria’s Government House and hosted by His Excellency the Honourable Alex Chernov AC QC, Governor of Victoria, a total of eight awards were presented. The Women’s Health West and Consortium received the award for Preventing Violence Together: The Western Region Action Plan to Prevent Violence Against Women in the category Active In Parks was also nominated for.

“To achieve recognition for the importance of parks in preventative health is very exciting. The program is a pilot and it is especially encouraging to be amongst the other finalists and winners. It was also great to see Medibank Community Fund recognised as a finalist for their innovative work in the Communications in Health Promotion category too.” Said People and Parks Foundation’s former CEO, Jacqui deKievit.

Medibank’s Head of Corporate Social Responsibility, Rita Marigliani added “These awards are great recognition of the hard work and creative thinking that goes into getting people to be more aware of and responsible about health issues that might affect them and how parks can play a part in good health. It’s great to see preventative measures that help people become fitter and healthier, rather than just focussing on treatment being acknowledged. To have VicHealth promoting our achievements is a real honour.”