In north west Victoria, running along the Murray River, there are untold numbers of ancient Aboriginal burial sites. But as the dunes shift and the land erodes, the bones of Ancestors, young and old, are becoming exposed.

Working together we can enable the Traditional Owners to rebury their Ancestors, and conserve and protect the natural environment that keeps their ancient Resting Places. 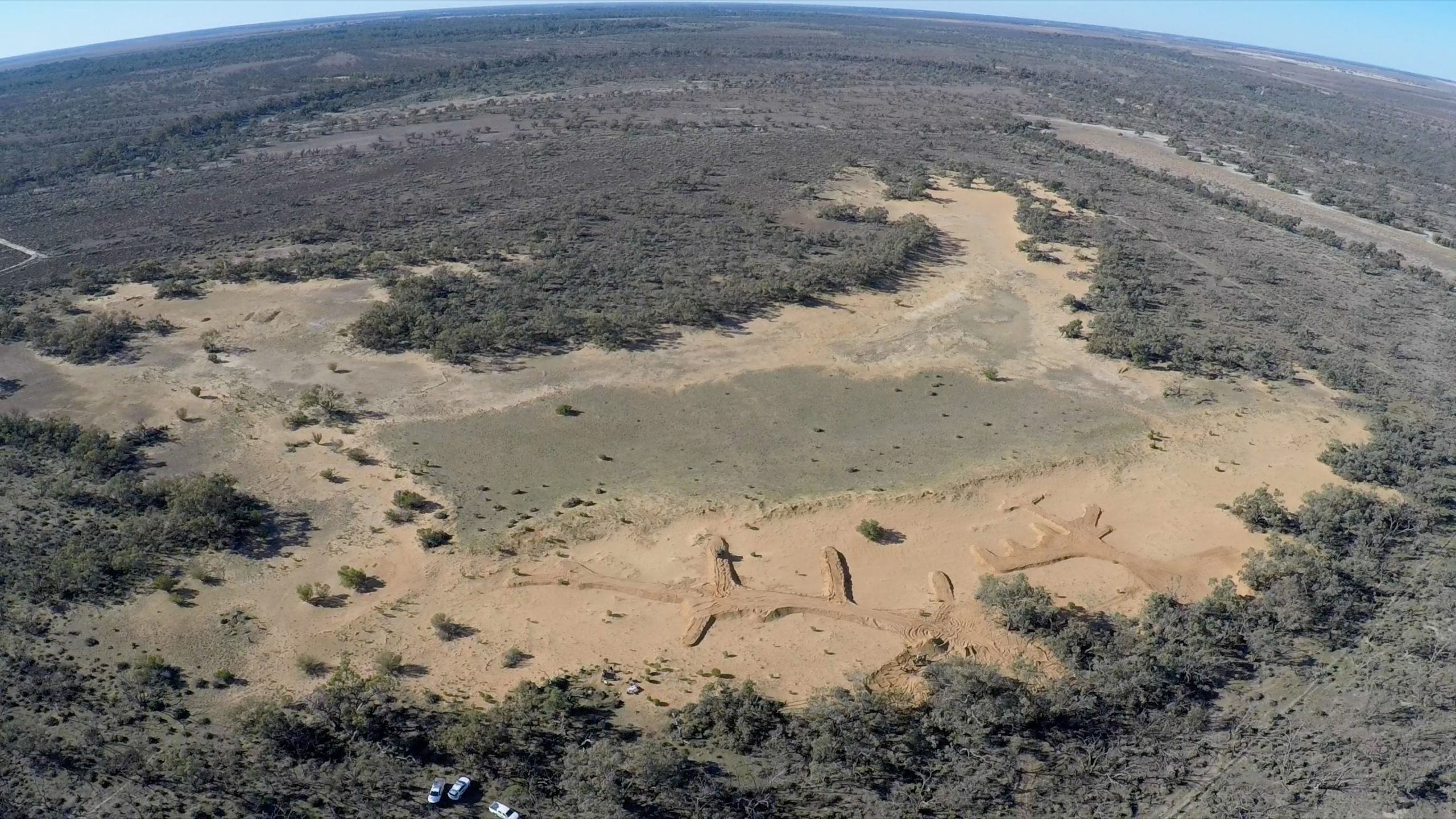 Aerial image: Restoration works at the site known as B16, courtesy of Luke Johnson, Parks Victoria.

In north west Victoria, where you find the Murray, Darling, Wakool and Murrumbidgee Rivers, there is a rich and ancient Aboriginal history. The Traditional Owners of this land have seen ice ages come and go, sea levels fall and rise, they have lived here continuously for tens of thousands of years. To them, the pyramids of Egypt are recent history.

“There was a constant water source here that filled the lakes, the creeks; there was plenty of fish, plenty of mussels, plenty of tucker for the Aboriginal people to eat, so the population exploded and obviously, over time, people pass,” explains Parks Victoria’s Statewide Cultural Heritage Protection Specialist, Damien Jackson.

Burial areas along the river were used and tended to for thousands of generations. However, since white settlement and the introduction of modern agricultural practices, pest animals and plants, the environment has degraded considerably. Furthermore, since Traditional Owners were removed from Country and disconnected from their traditional practices, these sacred sites have been left vulnerable to the elements. Now the Ancestors’ Remains are becoming exposed and their spirits are no longer a rest.

“They never would have expected sheep and cattle to walk over their remains. People drive into these areas and drive over those remains,” says Jackson.

“We have got to respect these areas and get something done about it, working with Traditional Owners, to give it the respect it deserves.”

Uncle Tinawin, Ngintait Elder and Chair of the First Peoples of the Millewa Mallee Aboriginal Corporation is leading the Corporation in the massive task of bringing dignity and respect to the Ancestors by restoring their burial grounds. Healing Country, as in so many cases, will also strengthen and heal Culture.

“When you see the bodies out there, we felt so helpless and so ashamed of ourselves, we didn’t even want to talk about it. These poor fellas are wandering round here like lost souls. Until they rest, we can’t rest,” explains Uncle Tinawin. 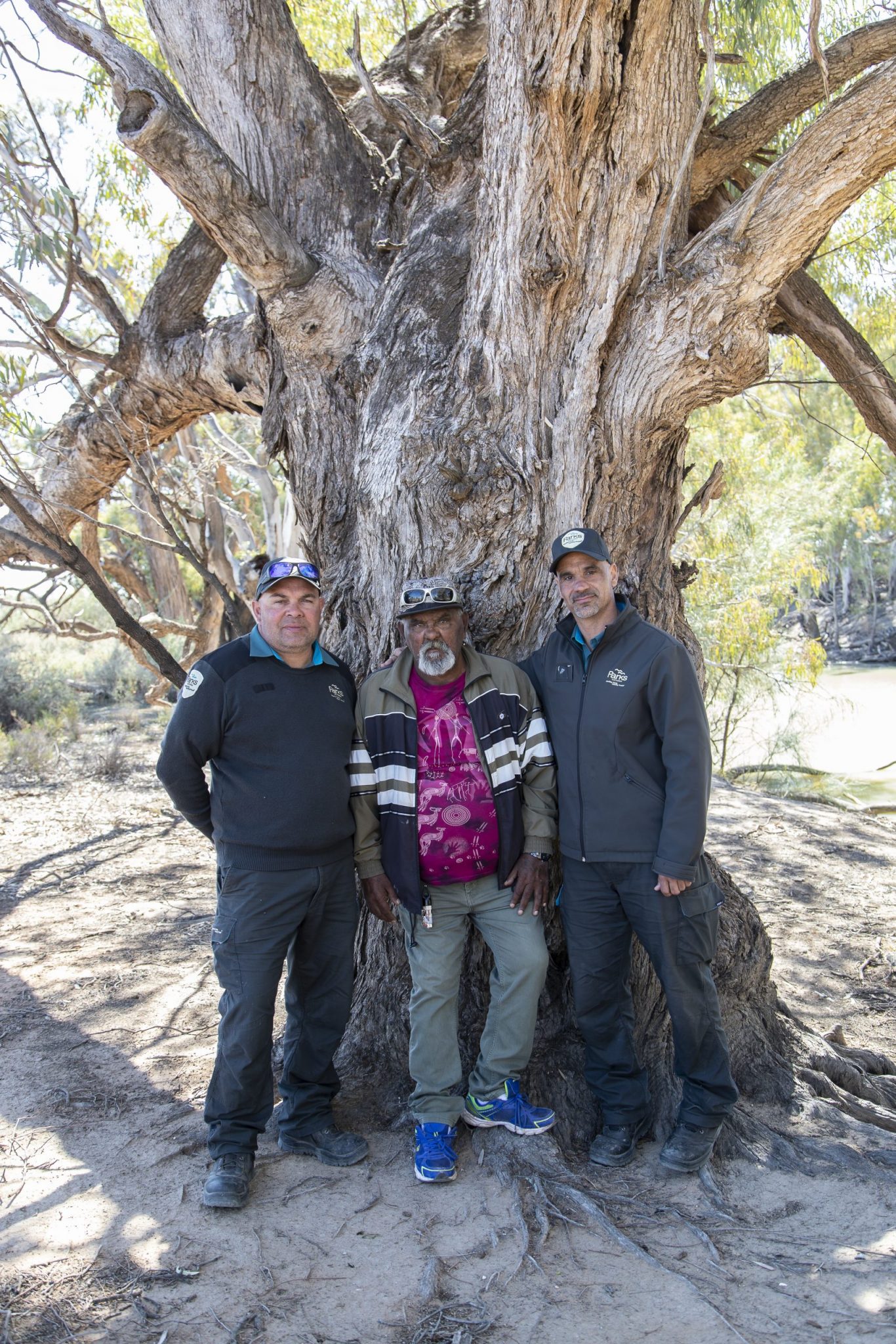 The job is a big one, too big for one person, one group, or even one Aboriginal Corporation to go it alone. Partnership is essential, guided by Traditional Owner wisdom, assisted by sound land management and supported by community.

First People of the Millewa Mallee Aboriginal Corporation, the People and Parks Foundation and Parks Victoria have formed a partnership to enable Traditional Owners to rebury their exposed Ancestors, and to repair the natural environment that protects these sacred Resting Places.

Work has been completed on a pilot site, including the reburial of all Ancestors and environmental conservation measures taken to stabilise the dune and protect the Ancestors. 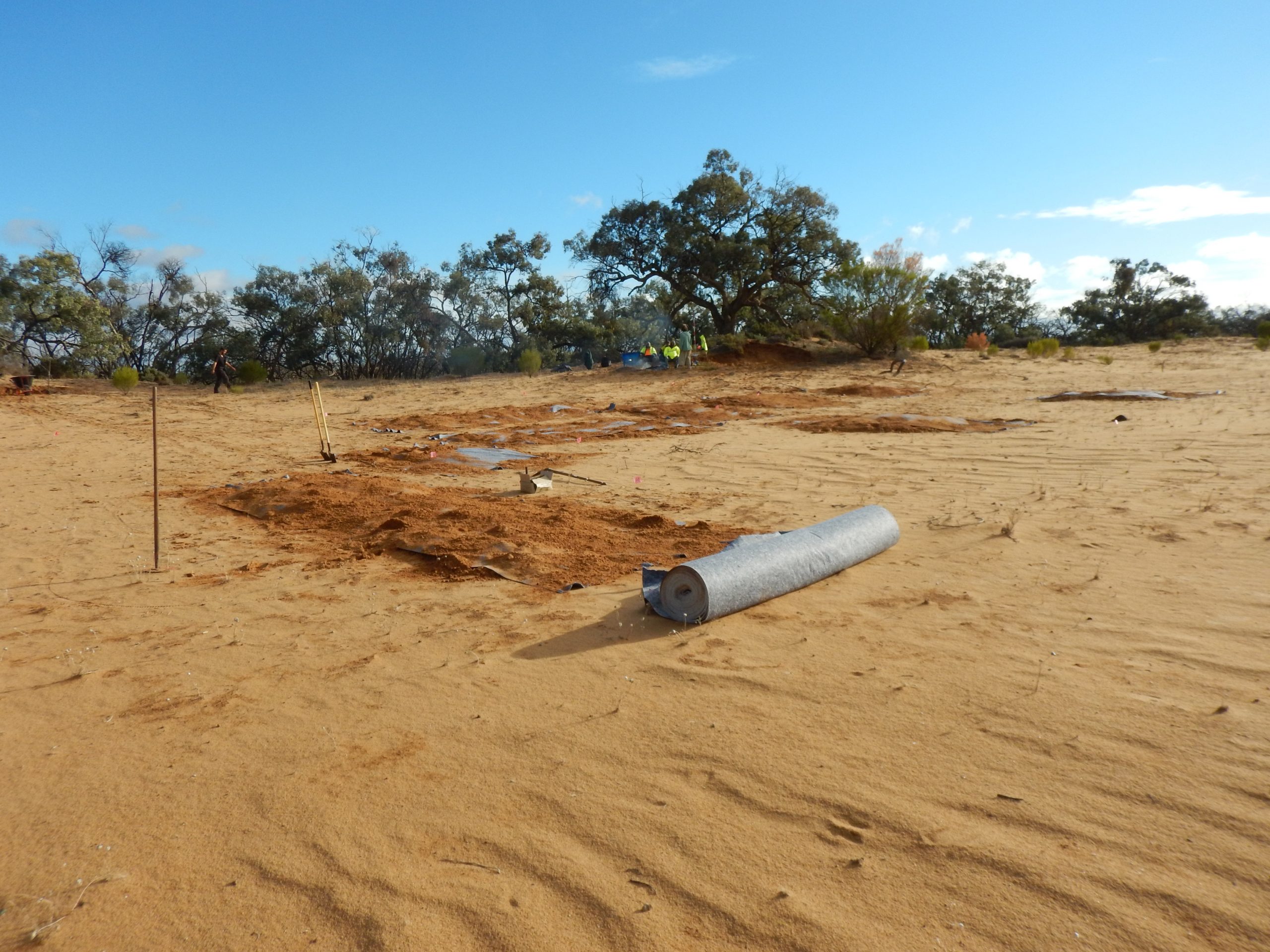 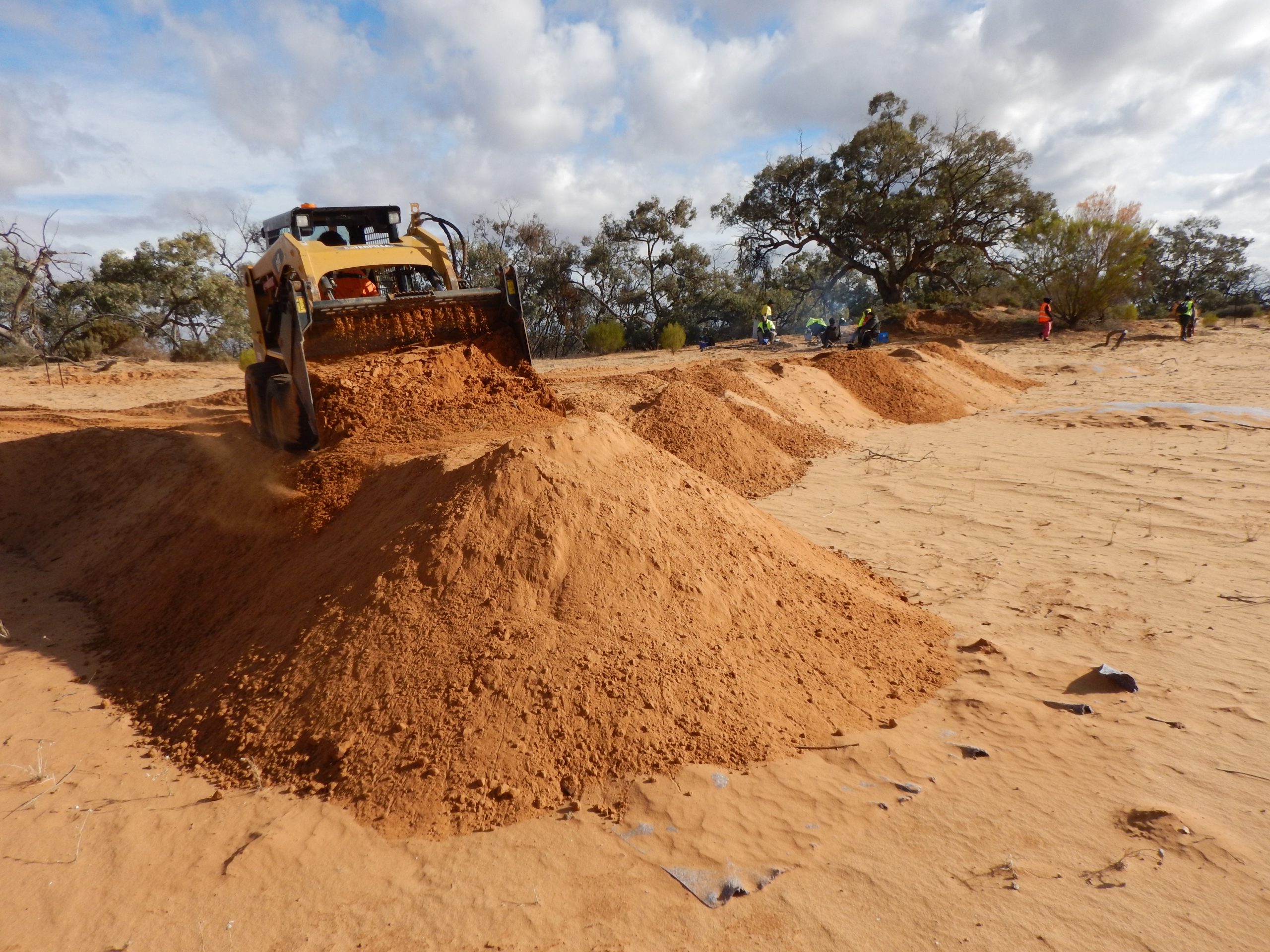 Machinery is used on site only after initial manual work is complete, image courtesy of Damien Jackson, Parks Victoria. 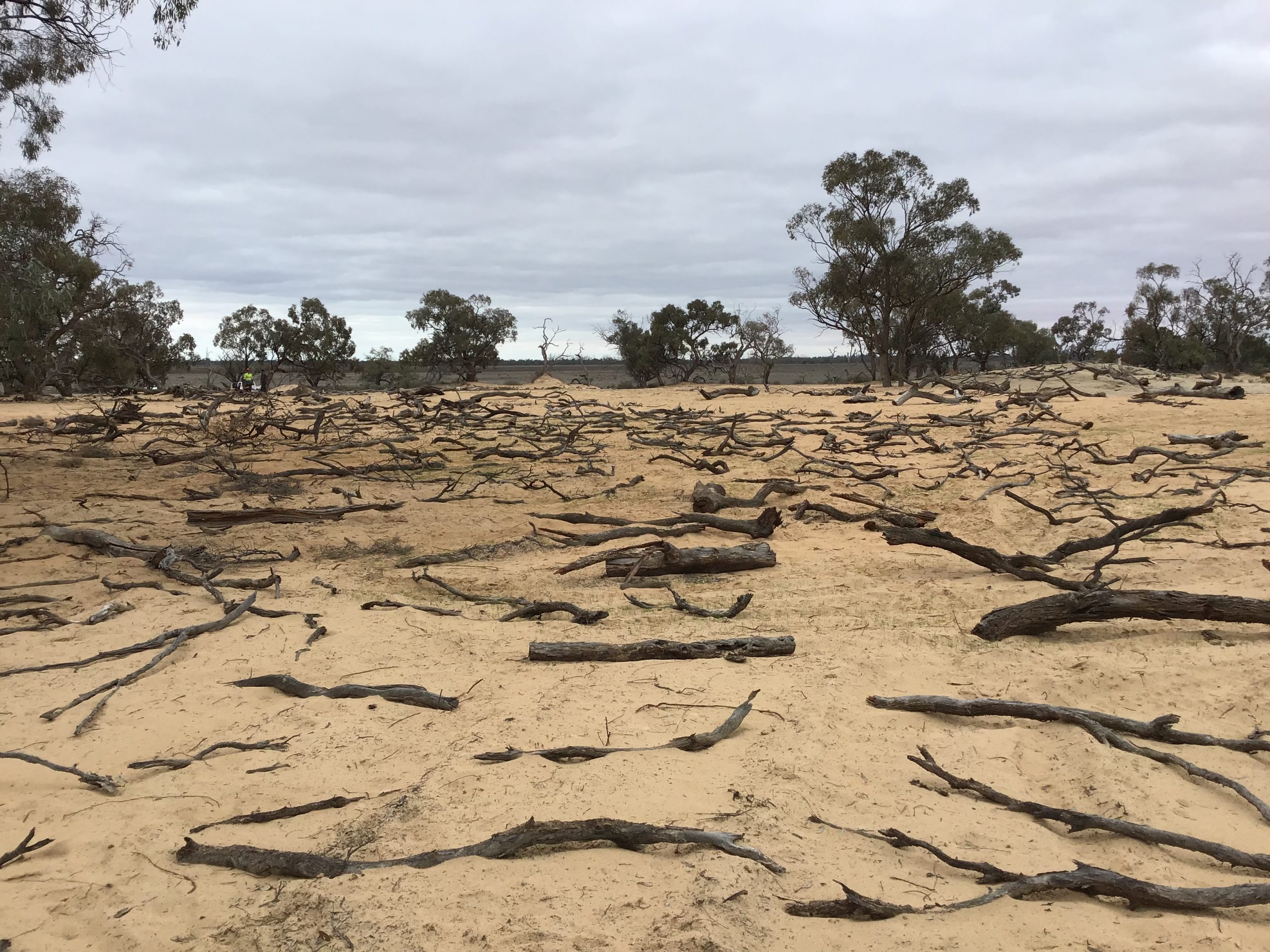 Once all Ancestral Remains have been covered to a depth of at least 1 metre, logs are laid over the area to catch the seeds that will revegetate the dune and prevent further erosion, image courtesy of Damien Jackson, Parks Victoria.

The healing power of this work is tangible to Elders:

“Years before I could only walk to the fence line, I couldn’t go any further. This time, because the skeletal remains were covered over, I was able to walk three quarters of the way over to another ceremonial area,” says Latji Latji Elder Aunty Janine.

Ivan Robertson, farmer and private landowner, has been hugely supportive of the project. It was on his land that the first pilot project was conducted over the winters of 2018 and 2019. The site has now been fully restored, and the rapid growth of native and endemic vegetation over what had previously been a great bowl and sand and dust is richly rewarding for everyone involved, not least Ivan himself who has been quoted as both relieved and happy that something is finally being done about a problem that has caused decades of heartache to Traditional Owners.

Site B16, on private land was the pilot site for the project, and is now restored to a healthy, flourishing environment with native and endemic vegetation that will protect these ancient sites from the devastating effects of drought and wind.

The First People of the Millewa Mallee have identified an area stretching 120km west from Mildura to Lindsay Island as a priority for Ancestral Remains burials work and environmental conservation. 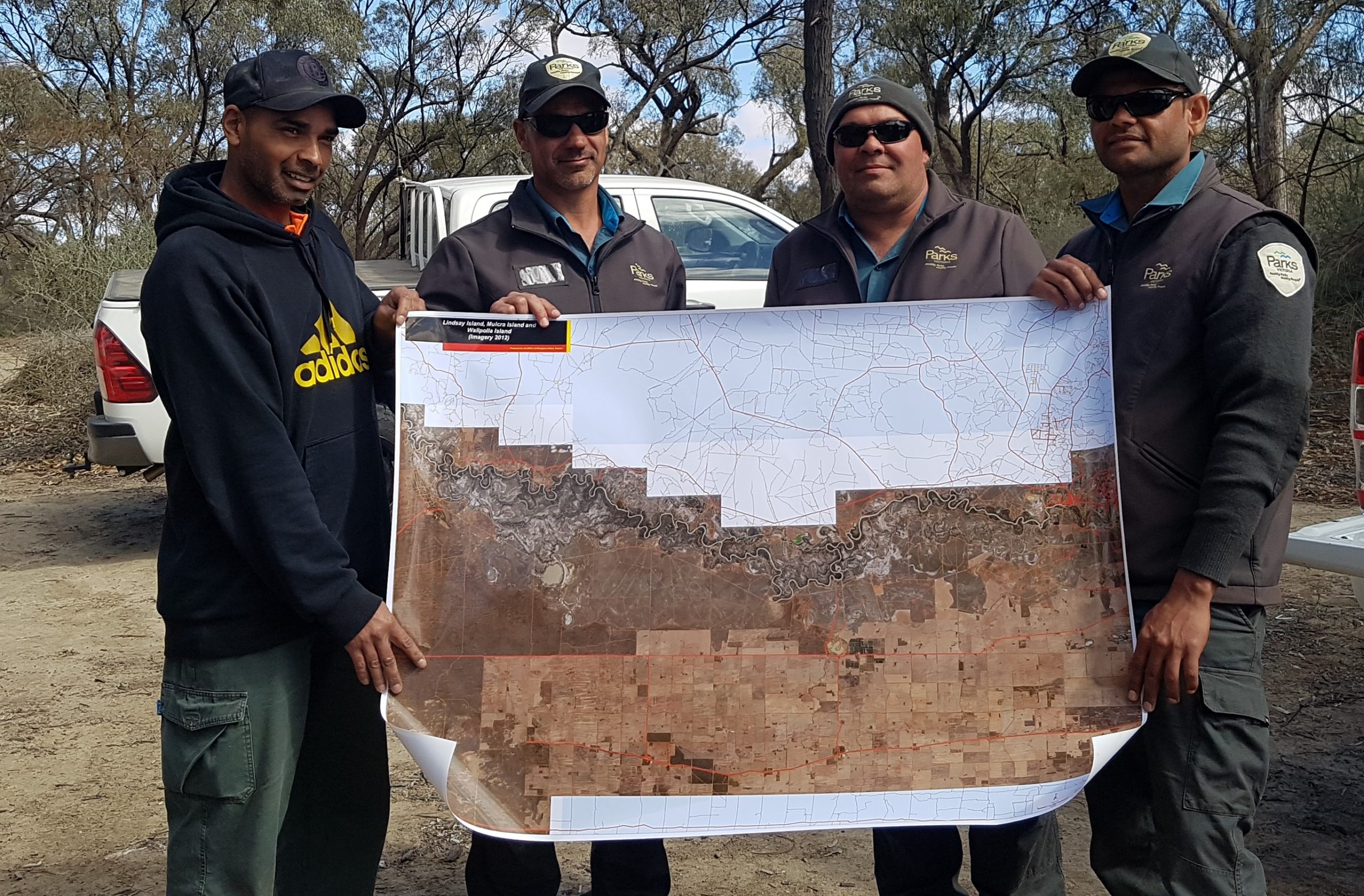 Parks Victoria’s Cultural Heritage Rangers hold up a map demonstrating the hundreds of Cultural sites along the Murray between Mildura and Lindsay Island.

Along with this priority list which will inform a Program of Works across Country, there are plans underway to work with the Traditional Owner community and broader community interests to build a community development program to train and employ Traditional Owners in north west Victoria, including preparing them technically and personally to be involved in this deeply spiritual work.

Right now, we are working closely as partners to plan out the next phase of work – to be done at scale across the landscape. It’s an enormous job, one that requires sustainable and innovative collaboration.

“This time because we have people working with us, people helping us out there, it was really great,” says Aunty Janine.

This is an opportunity to come together and contribute to healing of both Country and traditional culture.

“Parks Victoria has a very important part to play in the management of these sensitive cultural landscapes, and we must increase our efforts, in partnership with Traditional Owners, to ensure the dignity of their Ancestors is maintained,” explains Jeff Floyd, Chair of Parks Victoria.

“Traditional Owners have always known that when we care for Country, Country cares for us. We now have an opportunity to come together and apply this wisdom, to heal Country and people together. And we need to resource this together to make it happen,” says Alison Hill, Managing Director of the People and Parks Foundation 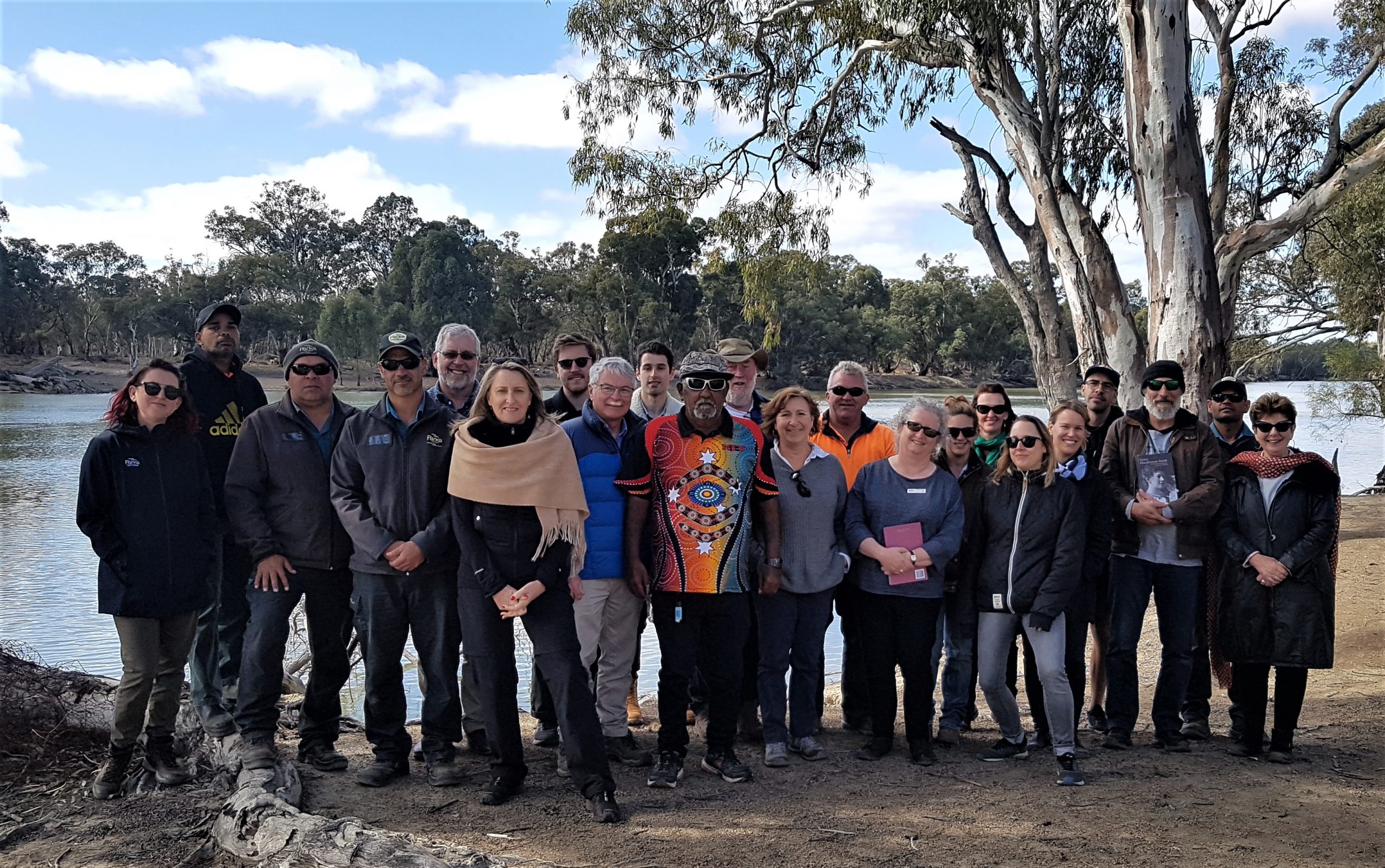 Partners in the project: First Peoples of the Millewa Mallee, Parks Victoria and the People and Parks Foundation visit Cultural sites along the Murray with project funders – the Helen Macpherson Smith Trust and The Vizard Foundation.

We gratefully acknowledge the support of The Vizard Foundation, Helen Macpherson Smith Trust and the Koshland Innovation Fund, a subfund of the Australian Communities Foundation.

If you’d like to find out more about how the project is progressing, please read our latest report:

*Donations $2 or more to People and Parks Environment Trust are tax deductible in Australia. For more information about how you can support this important project, please contact Alison Hill, Alison.hill@peopleandparks.org